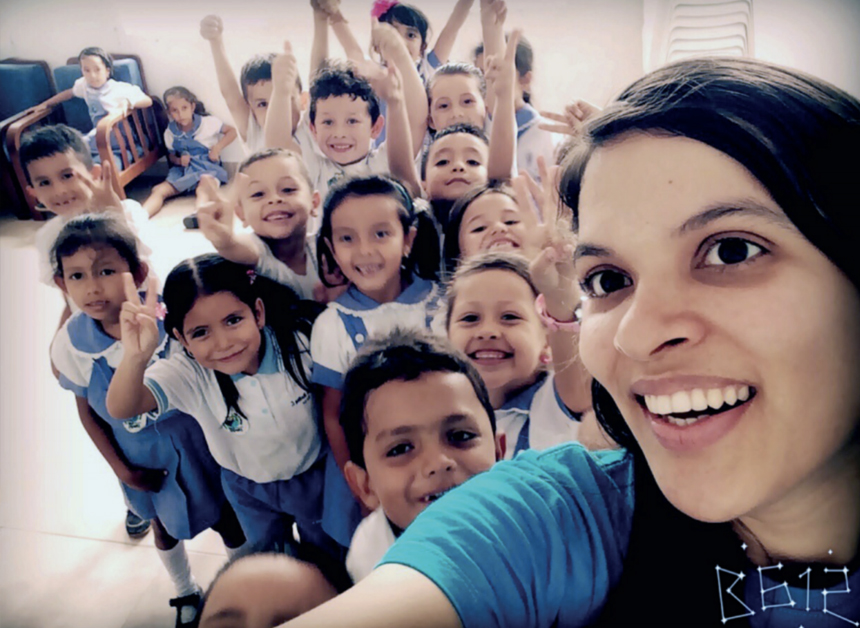 "Good morning, kids! My name is Caress Prado, and I will be your music teacher this year.... I want to get to know all of you! Please, tell me your names, ages, and what you did during the holidays."

And so began my first day of work as a music teacher in a primary school. An expectant group of twenty-five children watched me closely. It was the first time they would receive music lessons at their school. I could feel the air vibrant with their excitement and enthusiasm as they each began to look at the instruments that hung on the classroom walls. During my time with them, I would teach them how to sing, read music, and play the cuatro – a typical local instrument, and one universal instrument – the flute.

That morning, while one by one they related their names and their vacation stories, I noticed a girl about eight years of age, sitting alone, and noticeably nervous. Her large eyes watched me with terror as we neared the moment when she would introduce herself. Her pale face confirmed what I already suspected – she was extremely shy. I had seen similar cases, so when it was her turn, I approached her, dropped to her height and softly said, "Your turn, miss. Tell us your name and something you liked about the holidays." The whole room fell silent. It was evident that they knew something I was not aware of. I waited expectantly for an answer from the frightened girl. In turn, she looked at me with pleading eyes, ready to burst into tears at any moment. I glanced around, searching for answers. Nothing. Again, I asked the girl her name, but silence was her only response.

At this point I was worried. What had happened to this girl? Did she have a hearing or speech problem? How was I going to give her music lessons if she lacked these two attributes? The third time I asked her name, a friend came to the young girl’s aid. "Teacher, her name is Paola, but she does not speak." I stopped, not knowing what to do. I went to her friend. "How is it that she does not speak? Why?” The explanation was as simple as it was sincere. "Teacher, she is very shy, and her voice does not come out." I turned my attention back to Paola. It was true. Petrified by her extreme shyness, she tried to speak –but no sound came out. Now it was I who fell silent. My gaze returned to Paola, with her little arms clenched under the table, her eyes pleading, begging me to end this moment of torture. I moved on to the next child, not knowing what else to do. I had never seen such a case and decided to talk with the little girl’s parents as soon as possible. I did not want to hurt her, but this was a music class!

His parents arrived the following day. Concerned, they looked at each other, suspecting what the conversation would be about. I told them about the episode from the previous day. I said I wanted to help, but I just did not know how. How serious was her problem? Had they talked with anyone about it? Did she speak at home? Her parents reassured me that it was not so serious. When at home, the girl was completely normal – playing, screaming, and laughing like any other child her age. The problem occurred when she left the surroundings of her home and was unable to control her shyness. That prevented her from communicating, talking, or socializing with strangers. Her problems grew larger because at school no one could make her talk. If anyone ever forced her to speak, the only sound they would get, after much effort, would be an almost imperceptible whisper. It was evident that her problem was serious. The parents had tried different therapies, but nothing helped. I told them that I would try to at least include her in the classes as much as I could, but I did not know how much I could help her. I was just a young teacher with very little experience.

My first week of classes focused on music theory – the parts of the instrument, musical notes, and rhythmic exercises. From time to time I snuck a glance at Paola. She seemed interested in everything; but when I asked her anything she froze. During the second week I matched each child with a musical instrument. I decided against the flute for Paola, but instead placed a cuatro (a Latin American stringed instrument that resembles a guitar) into her hands instead. She grasped it with eagerness, her eyes shining, as she plucked the strings to produce her first sounds. She seemed to have achieved with her fingers what she could not express with her voice.

The next week, when Paola arrived in my class, she was beaming and gripping a brand-new cuatro. For the first time she wanted to tell me something. Leaning close, she whispered into my ear, "My dad bought me a cuatro.” She learned fast, much faster than her classmates, and soon she was a true artist on her instrument. No one could beat her speed in changing chords, grasping new rhythms, or accompanying the songs. She, conscious of her achievements and encouraged by the words of affirmation that she received from me in class, transformed before my eyes into a happy, extroverted girl, no different than any other girl in my class.

To make a long story short, we finally arrived at the last day of class. I had planned a presentation in front of the entire school. Paola was going to participate.

Her parents arrived early. Seated in the front row with tears in their eyes, they intently followed every second of the concert, scarcely believing that what they saw was real. Their daughter was seated before 150 companions, strumming her cuatro and singing Christmas carols with her precious soprano voice. And I, on the side, watching this display of talent, felt like the most privileged woman in the world. Music had made possible something that seemed impossible. Unfolding before my eyes was one of the greatest gifts I have ever received.