A captain from the former Soviet Union security service KGB who attended our church service under cover of his civil suit threatened us one day in Ukraine with death sentence for praying to God in the Soviet era, when we gathered for divine service in our homes, because the IMS of Seventh Day Adventist – Reform Movement, was forbidden by the communist state, Pastor Vladimir Zalozniy mentioned in one of his sermons. The KGB captain told us that each one of us who would continue to pray to God should be shot down, but those who were willing to stop praying to God could be allowed to go home, Pastor Vladimir Zalozniy added. Finally some of our church agreed with the command of this captain and went home, but we, a small group of believers, remained in the room and knelt to pray to God.

Today, Pastor Vladimir Zalozniy serves the Lord faithfully in the Ukrainian Field of IMS and he has 16 children and many grandchildren. In his life, God’s promise in Psalms 107:41 was fulfilled - “Yet he lifts the needy out of their affliction, and increases their families like a flock.” 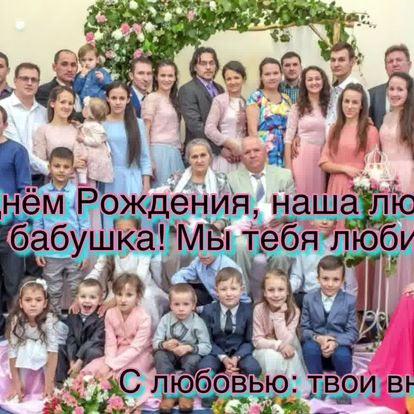 Pastor Vladimir Zalozniy and his wife together with some of their children, sons-in-law and grand children during his wife’s birthday;
a photo from the personal archive of Elena Zaloznaya on Facebook.