Pastor Alfonso Reto from Peru, one of the best Christian Pastors at the IMS who served the Savior many years as Peruvian Union President and General Conference Committee Member at IMS, fell asleep in the Lord today, on April 11, 2021, his daughter Magaly Reto announced on her Facebook profile. However, the end of Pastor Alfonso Reto’s life on this earth is not a victory of the Covid 19 virus. Despite his high responsibilities and positions at IMS, Pastor Alfonso Reto was a humble, kindhearted and full of joie de vivre servant of Christ with a sweet-tempered smile. He will be resurrected for eternal life during the second coming of our Lord Jesus Christ.

I remember the wonderful conversations with Pastor Alfonso Reto as General Conference delegate during several election sessions in this century. After the end of an election session, Pastor Alfonso Reto gave me as a present the Spanish edition of “Steps to Christ” by Ellen G. White. It was an amazing lesson for me. The Peruvian Union President, despite his many tasks and responsibilities, was a humble coworker of Peruvian Union’s publishing house and he was happy to encourage the publishing work of a field on the other part of the earth. He was happy to be a blessing for others. This is the sign of a true Christian character and one’s belonging to the heavenly family. 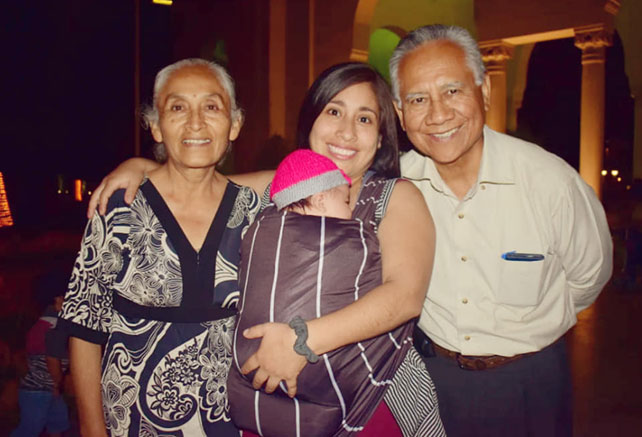 Pastor Alfonso Reto together with his daughter Magaly Reto, one of his grandchildren and his wife;
photo from the Facebook archives of Sister Magaly Reto.