What’s Going Wrong with Our Youth? 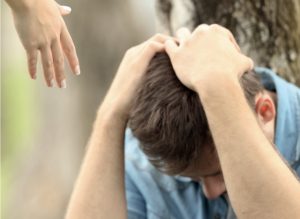 Newspaper articles, statistics, stories, and experiences of young people in recent months have kept me busy. The shocking statistics I’ve come across describe the problems of the Dutch youth, but these also likely resemble those of the Western culture in general. Research shows that 5 to 30 percent of 12- to 18-year-olds suffer from high levels of anxiety; another study shows that 45 percent of young people suffer from burnout and complaints of stress. An additional study reveals that almost half of our young people suffer from an invisible illness. It has been suggested that if we are not careful now, we will create a generation of zombies. What’s interesting is that Dutch children are reportedly categorized as among the happiest in the world, but once they reach their teenage years a large portion must seek emotional and mental help from youth institutions.

The backseat generation
We have created a backseat generation: we transport our children in the back seat of the car to piano lessons, sports activities, and school. We build a barrier to protect them from the rain and cold so they don’t get wet. They are taken to all their destinations with very little effort on their part; every aspect of their lives is arranged for them.

From a tender age, they begin to believe that this is how the world works. It begins one day as the child is constructing a tower of building blocks. When the tower is nearly finished, we know that there is a risk that it will fall as soon as the last block is placed. As teachers or parents, we may feel the urge to prevent the tower from falling and carefully set the last piece in place. In what may seem like a small or innocent act on our part, we prevent our children from learning to cope with setbacks or disappointments.

Friend or parent?
Today’s parents—those raised immediately after World War II—had a very strict upbringing. Rather than adopt the same parenting style with which they were brought up, they are taking the opposite approach with their children. They want to give everything that they themselves missed out on, resulting in a liberal upbringing in which practically anything goes. There has also been a shift in the parent—child relationship: where once parents were considered figures of authority, they are now more like friends. There is not anything wrong in and of itself in being your child’s friend, but clear boundaries must still exist. Let’s consider our relationship with our heavenly Father: the Bible says that we must fear God. “Fear” is often connected with something scary, but this is not the case in the biblical sense. In Psalm 2:11 we read that you can fear the Lord, but also be joyful. Abraham was called “the friend of God.”

So while we can have a close relationship with God and even be considered His friend, we must also respect His authority and obey Him. We are told in Leviticus 19:3 to “fear” our parents—respect and obey them. Unfortunately, today’s parents have to essentially beg for their children to get something done; the child no longer accepts the authority of the parent, which leads to further problems later on in life when dealing with those in other positions of authority, such as a boss at work.

No commandments or role models
I work in youth care with troubled teens that are sent from other institutions as soon as they are no longer able to handle these youth. We are essentially the last resort when other organizations exhaust their resources in dealing with unruly behavior. In this line of work we know that guidelines and rules are essential and offer safety to teens. If rules are not explicitly set forth, you can easily notice that the youth will constantly push the limits on what they can get away with. We can apply this idea more broadly to every one of us in our dealings with God. Investigative journalist and expert of historical pedagogy Mirjam Schöttelndreier states that all developments after the war have undermined parenthood. She is referring to liberalism—we no longer believe in discipline. People want to free themselves from restraints, including subjection to God and parental authority. Contrary to popular belief, the law of God and the rules He has given us on how to live our life, give us liberty, rather than restraint. When we follow the law of God, we know where we stand. There is a loving heavenly Father who has created us and therefore knows what is best for us. James writes about this topic that is difficult for many to understand: about the law that brings freedom (James 2:12).

Recently, my team leader showed me two pictures of his daughter. In the first, taken 6 months ago, she looked like a sweet, beautiful girl of 16 years of age. In the second, taken recently, she has a pink mohawk and seems to have made a 180-degree turn. During this short period, she also became depressed and suicidal. Her father told me that she’s not sure if she’s a boy or a girl and doesn’t like being addressed with normal gender pronouns. On days that she feels more masculine, she’ll wear her brother’s clothes; on other days she’ll wear girls’ clothing. I can imagine that society today is a very difficult and confusing environment for children and teens. They are attacked and influenced in all areas of life so that they can no longer discern between right and wrong.

There is no shine without friction

Someone once said, “A gem cannot be polished without friction; the child of God cannot be perfected without adversity.” Children do not learn to ride a bike by simply knowing the theory—they learn by doing it. They often start by using training wheels, then the training wheels are removed, and the parent helps support the cycling child. Sometimes the child will fall, but it is rare for the child to refuse to ever ride a bike after his first fall. By getting up and trying again and again the child will ultimately learn how to ride a bike. The protection, challenge, and proximity offered by the parents is very important. I sometimes see that parents, often with the best intentions, limit and protect the child in almost every way. However, in doing this children are unable to build up any mental muscles and they fail to learn how to deal with disappointments and external influences at a later age. Through their struggles, they will know how to deal with the world as it is.

When I came to the faith a few years ago, I decided to follow the laws and advice given by God because my “why” questions--why do we not eat meat?, why should we keep the sabbath?, etc.—were answered. Gabriel Porras, who gave me Bible studies, answered every question I threw at him in a sensible, logical manner. I picture God as someone who will also invite us to sit together in a beautiful field to reason with us, as it says in Isaiah 1:18: “Come now, and let us reason together.” In the same way, we must understand that what children and youth need is not someone who will list off all the things they have to do, but rather someone who will offer them support, acknowledge their concerns, and provide a fresh perspective; someone who can understand the difficulties and pressures of modern society; someone who will guide them to do the right thing, not “just because,” but with reasoning and love.